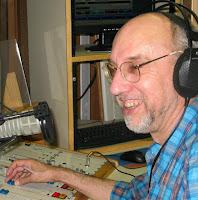 I have come to know Marc by browsing and buying records and talking music with him at his store, PJ's Used Records, in Ann Arbor. I have discovered and come to love some great old, new-to-me music in the racks at PJ's--blues, jazz, old-time country.... When I brought in copies of my album to see if he would sell them in the store, he put it on the store stereo and responded immediately and enthusiastically to the songs and the sound. He has continued to offer kind words about his enjoyment and connection to the songs and also help in promoting the album. When I asked if he would be willing to write up a short description of the album, he had this to say:


Jon Ponder's Many a Good Long Year is a family affair of American song. While recorded in the Mitten state, it reflects his own family's East Texas roots, even including short pieces of personal history recorded by his grandfather's string band. Jon's own originals are deeply sincere slices of the modern "American Family" experience. His basic trio of guitar, banjo/mandolin, and cello (!) is augmented by some of Michigan's finest pickers and players, beautifully recorded, satisfying as a hot home cooked meal on a cold Michigan winter night. I invite you to join the family.

--Marc S. Taras hosts the radio program Cuban Fantasy on NPR affiliate 89.1 WEMU-FM, Ypsilanti, Michigan, online at www.wemu.org, and holds down the fort at PJ's Used Records in Ann Arbor, Michigan with his beloved brother Jeff.
Posted by Jonathan Ponder at 8:33 AM